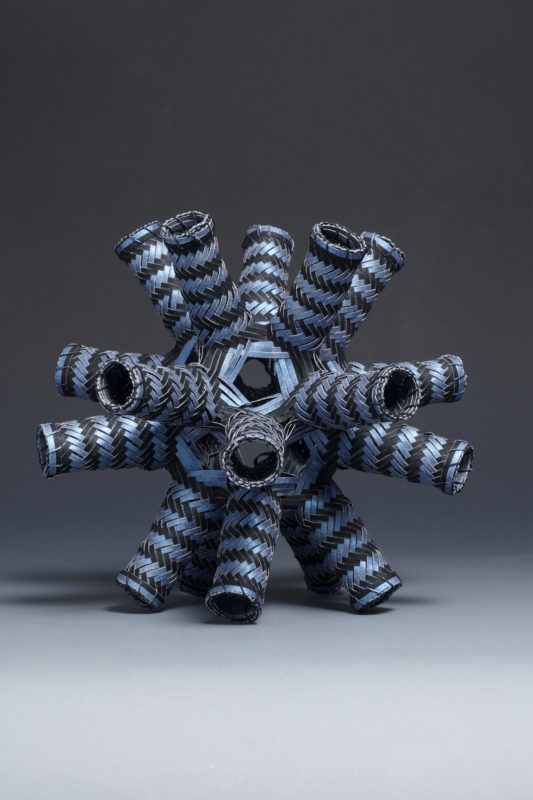 After 31 years of exploring the woven form, Dorothy McGuinness has mastered the art of diagonal twill. With it, she creates forms and structures not normally found in the basketry world. Her medium for this unique work is watercolor paper. Dorothy paints the paper and cuts it into very narrow uniform strips to achieve the precision she seeks.

Tell us a little bit about you and what you do.

When I started looking to buy a house with studio space, I had lived most of my adult life in Seattle. I found one I could afford in Everett, a place with a detached garage I could use as my studio. It seems hard to believe it will soon be 14 years since I signed the mortgage papers. Now I spend many an evening and weekend working in the studio on new pieces. And when I need inspiration I can dive into my ever growing collection of over 300 basket books.

Why weaving? Why baskets? How did you get started?

I took my first basket making class in 1987 from the University of Washington Experimental College. It was called Creative Basket Making. It looked interesting and I thought it would be a fun new craft to learn. We learned twining, coiling, and diagonal plaiting and working with natural materials. I was hooked. The techniques of basketry came easily for me and I enjoyed working in 3 dimensions.

Before I became involved in Basketry I did a lot of different types of hand work: knitting, crochet, cross stitch, needle point and embroidery. But I dropped all that after I took my first basketry class. I still occasionally do a little knitting or crochet, but I’ve concentrated exclusively on basket making for many years.

I was very fortunate to start my exploration of basket making just as Michelle Berg and Leslye Coe were starting up the Basketry School in the Fremont area of Seattle. It became my home away from home. I took almost every class they offered, whether I could afford it or not. I was at the school at least once or twice a week whether I had a class or not. It was just a great experience to have all the exposure to so many teachers, techniques and materials.

In 1994, about the time the Basketry School was winding down after 7 or 8 years, another basketry school opened up north of Seattle in Marysville, called Fishsticks. This is owned and operated by Judy Zugish and Bill Roeder. They brought in many national and international teachers to teach workshops at their studio. So my basket education continued. Although Judy and Bill are focusing more on their own basketry work now, they still have the occasional interesting teacher in to tempt me to take one more class.

What inspires you? Are there recurring themes in your work? Do you do series work? How does that affect your approach?

Approaching my work as a puzzle drives me to discover new shapes and weaving innovations. I often think, “How will it work out if I try this, or how can I get this shape or pattern combination? What if I use these colors in this combination in this order? What if…” I rarely do any conceptual inspired work, I am more process driven and I am much more interested in the math and geometric constraints of the work. Using hundreds of strips of paper at a time, I explore new structural forms:  multiple woven units, asymmetrical corners, weaving opposite corners together, multiple-stepped corners in tandem that add structure to the work. I am intrigued by the potential outcomes of any new design. The series work I occasionally do is usually trying to see how far I can push an idea or technique with iterations.

Describe your techniques? What do you do differently? What is your signature?

My favorite technique is diagonal twill. It has been a very versatile technique for me. It has allowed me to work more and more sculpturally. I think what I like best about diagonal twill is that once you have the base woven there are no more weavers to add, you just turn the corners and then weave until you run out of spoke.

I believe my materials, sculptural forms and my finish work with a sewn and wrapped border using waxed linen or polyester thread, is distinctive of my work.

How would you say your creativity has evolved over the years? What triggered the evolution to new mediums?

The first 15 or 20 years I was learning all I could about basketry: the techniques, materials and processes. In 2000 I found paper as a medium when I took a class with Jackie Abrams on using paper for weaving and I never looked back. It was what I needed to explore diagonal twills and play with color. Watercolor paper is very versatile for weaving, it’s strong but flexible, you can buy it at the store and it involves minimal prep.

How have other people supported or inspired you? What’s the best piece of advice you’ve received?

I’ve taken more than 200 basket workshops over the years and many of them have influenced my work. I’ve taken many classes in natural materials and traditional techniques from local native artist. These include Anna Jefferson (Lummi), Holly Churchill (Haida), and Elaine Emerson (Colville). I’ve worked with willow, ash, cedar bark, white oak, birch and many other materials. I’ve explored coiling, twining, plaiting, mad weave, rib style baskets and everything in between. But, diagonal twills are what I enjoy working with the best.

I think Judy Zafforoni first exposed me to the idea of just playing in basketry. She was very good at letting students experiment with structure and form with her woven cherry bark baskets and folded pouches. She would encourage students to try something different to see what would happen. Sadly she is no longer with us.

I was first exposed to bamboo baskets at the Basketry School by Nhia Heu, a Hmong tribesman, who wove beautiful functional baskets. I then started my study of Japanese style bamboo flower baskets with Jiro Yonezwa at the Basketry School and continued studying with him at Fishsticks, taking more than 30 workshops over 15 years with Jiro. That’s where I learned many styles of Japanese weaving techniques using bamboo: diagonal and undulating twills, hexagonal and hemp weave, rinko and chrysanthemum starts, various embellishments and much more. I believe that Jiro had the greatest influence on my work in terms of technique and esthetics.

The Northwest Basket Weavers, Vi Phillips Guild has always been very supportive of my work and a great organization for networking and making new friends. There is now a national organization, the National Basketry Organization, which extends my ability to connect with even more basket makers across the country.

Tell us about your studio setup. Why does it work for you?

I have a detached garage I use as my studio. That’s where I paint and cut my materials and store my supplies. I sometimes weave out there, but have lately been weaving in my living room.

What are your favored/most used materials and indispensable tools? How do they improve your work?

I almost exclusively use watercolor paper, 140lb. rough, as my medium of choice. I buy it in sheets, 22 x 30”, mostly, but also in rolls for larger work, since I don’t like piecing weavers. Occasionally, I use Yupo which is a plastic paper. I use various acrylic paints, mostly Golden. I was very disappointed when Daniel Smith quit making acrylic paints, because they were my favorite. My most important tool is my pasta maker which I use to cut the paper into strips. I can buy various size heads to cut different widths, but I mostly use a 3mm size. I also use small clips, a flat awl, clippers and a sharp knife.

Your work is quite intricate. How much planning and plotting happens before you start to manipulate your materials? How do you make the leap from an idea in your head to the art you produce?

I keep journals with ideas for future work, most of these are “what if” ideas. Sometimes the hard part is deciding which idea to work on next. A lot of the planning comes from deciding how many strips of paper I will need to weave up these ideas. Whether I will need longer pieces than the standard sheet of paper and need to go to a roll for length. Sometimes I can use shorter pieces, so need to decide the most efficient way to cut up the paper. Deciding what colors I will paint the paper, sometimes color is important for the design, but not always. If it is a multi-start piece I have to weave each of the individual beginnings and then weave them together. Each beginning can have its own design issues depending on the desired outcome.

Tell us about a challenging piece. What were the obstacles and how did you get past them?

I often work on pieces with multiple starts that just look like a random pile of paper. It can be hard sometimes to believe it will turn into something interesting, but I just keep weaving and packing until it finally comes together. Sometimes the piece will turn out much as I imagined it, but many times the piece goes somewhere totally unexpected, which I always enjoy. Sometimes finishing the rim on a convoluted piece can be very challenging; I use a lot of clips, lots of lengths of thread and a lot of patience. It can sometimes take longer to finish the rim than it did to weave the piece.

Where can people see your work? Do you lecture or teach workshops? How can students/organizers get in touch with you to schedule an event?

I currently have work at the Island Gallery, Bainbridge Island. I don’t teach, but have given presentations over the years. My website is http://www.dorothymcguinnessbasket.com and people can contact me through my website or at [email protected]

What are you working on now?

Lately I have been experimenting with mad weave. Diagonal twill is created on two axes but mad weave (or triaxial weave) is a basketry technique with weaving elements in three directions (at 60° to each other) woven close together so that an almost continuous surface is produced forming a strong and distinctive fabric that lends itself to interesting color patterns and shapes.

What’s next for you?

I have two shows coming up next year, “Uncommon Paper,” at the Northwind Arts Center in Port Townsend, with a group of paper artists that I’m a member of. I also have a show in September at the Corvallis Art Center in Corvallis, Oregon. And I have a piece in the traveling show “Rooted, Revived, Reinvented: Basketry in America Exhibition.” It is presently at the Houston Center of Contemporary Craft until September 2nd and will be at the South Dakota Art Museum from October 19 2018 to January 12 2019 and then onto the Fuller Craft Museum from May to August 2019 and the Ruth Funk Center for Textile Arts at Florida Institute of Technology from September to December 2019.